I admire those who take on the challenge of building a boat or an airplane. CNC technology on kits has done for creative people, what the GPS did for adventurous people. (Not that they might not be one and the same) Cruising is far more accessible to those without traditional navigational skills, and CNC routering has opened up a whole new avenue to those who want to create something that would otherwise have been beyond their skill level.

Pause on that thought while mentally revisiting a lot of fun sailing..... OK-back to the present.

Our customers come from many walks of life and a wide range of ages and skill levels. However; they never fail to impress me. While Russell can take  credit for creating a beautiful design, kit and manual, our customers need the vision, passion, patience, and attention to detail for good results. To add the complexity of documenting their own efforts takes the same qualities and much more.  I cannot, for example, count how many tens of thousands of photos Russell had to carefully set up, snap, choose, and edit to get a few hundred for the manual.

Hence, for this post, I would like to point the spotlight on the Kerr Family; Randy, Kim, son Alex, and good friend Mark. Not only did they  complete their beautifully built PT 11, "Lil' Bear" in about 6 weeks, their documentation of the experience resulted in a wonderful

and creative little video. The feedback from Kim and her family has been so meaningful to us and I feel puffed up with pride like a mother hen. With their permission I am sharing some of that feedback and the wonderful present of this video. Randy's videos are all beautifully created and fun to watch so explore and let them know what you think.

From Kim, "It was your  PT11 kit that made my dream of having a sailboat come true!!!!!   Randy and I can’t quit talking about how grateful we are that you guys put so much heart and thought into such a beautiful and smart kit.  She sails and rows like a dream!  Highlight of our summer to build and sail that boat!
So thankful for you and Russell."

Yes, there are some crazy things happening in our country and in the world. I refuse, however, to let that overshadow all of the wonderful things and people that, through shear existence and positive attitudes, are in some way, making this world a better place, cherishing what is good and beautiful.  Thank you to the Kerr family and all of our customers for your inspiration. AEB 😉

In August, we launched our “new” cruising boat, downsizing from Jzerro to a trailerable catamaran, unique in that genre, the Gougeon 32. We have managed to get away twice this year, on a shakedown trip to Deer Harbor and a week long trip into the San Juan’s after our local Boat Festival. On this last trip we took the PT 11, mounted on a custom made platform. I managed to miss getting a photo of it nested on its platform so we have to get that later.

We 'rendezvous'ed with 'Vito Dumas', our frequent sailing buddy, in Shallow Bay, Sucia. It turned into a stormy night but we still got in a good hike and a fun row. I snapped the above shot simply because I was struck by the interesting contrast of vessels. 'Mary H' is owned by a lovely couple, Lou and Al, who even offered to serve as a ‘dock’ when our anchor was not cooperating. Lou and Al are lifelong sailors only recently giving up their sailing home of decades, for more comfort without giving up mobility on the water.

Russell and I do enjoy rowing around and exploring. Having Alex with us in his PT SPEAR, 'Pato', makes him our best model. He is both a great sailor and rower and I am ever grateful he has not fired this photographer for being such a pest. I cobbed together a short video of our week.

As the wind picked up the next day, we decided to move around to Ewing Cove.

We were able to pull the dinghy onto the platform without taking it apart, for the short runs.

After a day in Ewing Cove we sailed to Stuart Island into Prevost Harbor. 'Mary H' had moved there and Madam Pele, with Ian Andrewes showed up too. Ian was aboard the R2AK 2016 winner, Mad Dog Racing. Al Hughes on 'Mary H' was Captain on the 2015 R2AK winner Team Elsie Piddock. It felt like a small world, in a  good way.

From Prevost we moved to Reid Harbor. There Alex and I practiced our capsize drills. An effort was made to film all of this but the resulting video is mostly out of focus. A camera glitch...Bummer!

The next day we all had a good sail to Skull Island. (Orcas Island) There we enjoyed some sailing, rowing and hiking before heading back to Port Townsend. There was an impressive wooden, converted work boat crossing the straights with us. The view was beautiful. Photos follow.  Video HERE.

Click photos for larger view, then back tab to return. 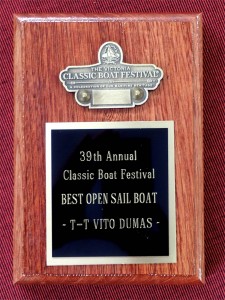 This year was the 39th annual Victoria Classic Boat Festival.  Among our friends who participated, Alex Spear was there with his beautiful boat, Vito Dumas and her tender, ‘Pato’, a PT SPEAR. 'Pato' is in fact the very first PT SPEAR.
In Alex’s words, ‘An esteemed panel of judges, including our local Carol Hasse, selected the PT 11/SPEAR as the “best open sailing vessel in the show”.'
This is a great honor. According to Alex,  ‘Pato’ was not independently entered in the show but it garnered so much interest and attention from the judges that they deemed it worthy of mention. Our humble gratitude goes out to the judges.

Below, Looking back on a rainy Deer Harbor.