Our kit Manuals are temporarily out of stock and unavailable until FEBRUARY 2019. Our local printer suddenly closed and we are working on setting up the files with a new printer. We are also revising those files to make our manuals better!

Our office will be closed December 2nd - December 9th.  We will answer emails as often as we can during that time.

Due to UPS increased peak season rates and the fact that UPS drivers are seriously stressed out during the holiday season, we will not be shipping kits until January 2019. Our kits are already a maximum sized package for them and we feel the risk for damage is higher at this time of year.

We wish everyone a happy Holiday Season,  Happy Hanukkah, Happy Winter Solstice, Merry Christmas, Happy New year, and any other special holidays I may have missed. Kindness and peace, good health and healthy provisions to all.

5 months after the 2018 Race to Alaska, I am finally getting a video published of Russell’s second leg to Ketchikan. I won’t deny that some of us were freaking out watching this race in the first 3 days as Russell pulled ahead of the leaders every day in spite of sleeping every night while the boats with multiple crew were underway non stop. It shows just how fast the Gougeon 32 catamaran can be in the right hands.

After that third day in Johnstone Straights, passing the lead boat, Team Sail it Like a Girl, Russell debated the sanity of what he was doing. That day had presented frustratingly light winds to sudden micro blasts that threatened serious harm, and after waking up Day 4 to total calm and contrary current, he waited for a favorable current and made the consious decision to focus on finishing without destroying the boat rather than trying to continue leap frogging to the lead.

There was a lot of pedaling done during this race; a lot of drifting, a lot of getting roasted in the sun. The multitude of drift logs, kelp rafts, and breaching humpback whales demanded that crews remain seriously alert. It was not until the 7th day of Russell’s race, that he had consistent wind all day. That was his 130 mile run from Aristazabal to Dundas Island where he kept his promise to himself not to sail in the dark. He regrets that choice only a little, mainly because he got badly bitten by black flies and in retrospect, he would have enjoyed wind had he just kept going.

His crossing of Dixon entrance was fair enough but the wind died as he entered Alaskan waters and that last stretch was grueling and wet with rain. Russell did not know who was nearby until he figured out that the high powered trimaran, Team Wright, was very close. That gave him the gumption to push harder, wanting to finish ahead of the bigger multi-hull. He succeeded but he was tuckered out from pedaling for hours by the time he stepped onto the dock. He spent his next few days nursing waterlogged feet...or, trench foot being another name.
He finished in the evening of his 8th day, counting from a noon start in Victoria to noon + 4 in Ketchikan and thus broke his own solo record from 2017 by a day. Happy to have made it, he remained humble and shy of the spotlight but I was pretty tickled he had done so well. The real joy of the R2AK for us, is the trip home and you can trust with me ever grabbing the camera, that there will be more photos and videos to sort though.
I hope to follow this video with some of those clips soon.  Follow the link below to see a video of Russell's 2018 race from Victoria to Ketchikan.

This was the last tracker shot I could save before racing myself to Seattle to catch a plane to Ketchikan. I had to be there for the finish!\

PT Watercraft, PT Marine Trades Association, Port of PT, NW School of Wooden Boat Building and the Shipwrights Coop of Port Townsend will all be present at this years FISH Expo in Seattle this coming weekend. http://www.pacificmarineexpo.com/

PT Watercraft will not have a boat displayed but I will be there on Monday, November 19th all day.  It looks like all of the above mentioned will be in the same area of the expo, providing a kind of Port Townsend corner. I hope you will come by for a visit. The port is under new management and is eager to interact with and welcome regional boaters and also trades folk interested in setting up shop in Port Townsend.

Russell was recently featured in Proboat Magazine. Have you seen it? The article details some of his methods for compression molds and making small parts and custom hardware. It is a bit of a preview to a book he has been collecting material for. We have been fans of Proboat magazine for a long time.
Check out this article and consider subscribing to this informative publication!
https://www.proboat.com/2018/09/carbon-from-the-coop/ 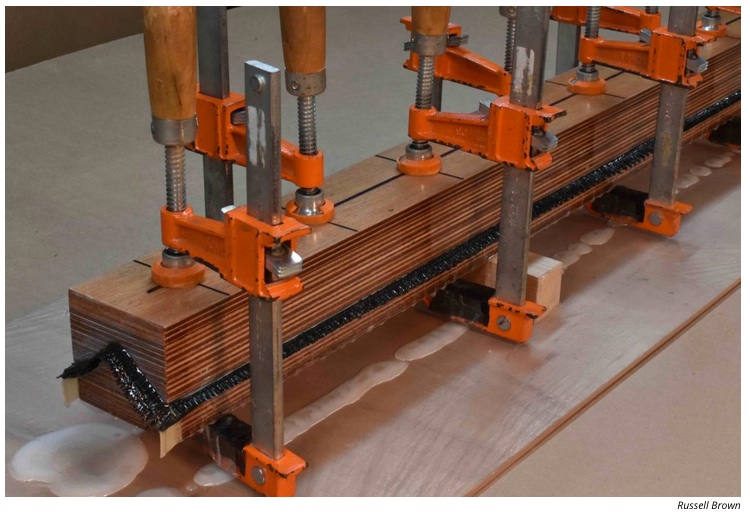