ROLLING PERFECTION
Recently we did a rather large paint job where the bubbles left by the roller refused to pop and the result was a very pock-marked finish that took a distressing amount of sanding to make smooth again.
Why did this happen? At first we weren’t sure, but now we feel the need to bring up two possible causes for paint-job disasters to be avoided.

Two things we learned are: The reactor (the smaller can) has a two year shelf life from date of manufacture. 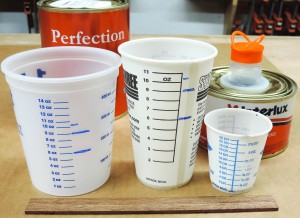 While I’m sure I have successfully used paint that was older than that, if the reactor starts to thicken, don’t try to use it. There is a code on the bottom of the can, but you’ll have to call the phone # on the side of the can to get them to tell you what it means. Apparently Interlux will not provide the reactor separately.
The other thing we are learning is that over-thinning can also cause the bubbles not to pop. It seems like 15 percent thinner (as our book recommends) can be too much at times. We just did a large job thinned at 10 percent that came out amazingly well. While we have had excellent results in the past thinning up to 20 percent, that may have been an anomaly. We will update the Rolling Perfection book to discuss both of the above issues.

Using this paint with the roller only method can be relatively painless, satisfying, come out beautiful, and last forever. or, like any paint, it can all go wrong. There are so many factors that can influence a paint job. Our experience with this paint has been almost all positive, but one bad experience can be a wake-up call, especially for us, as we happen to sell a book on the subject.

Also, we haven’t used all the colors of Perfection and don’t know how that relates to handling and results. 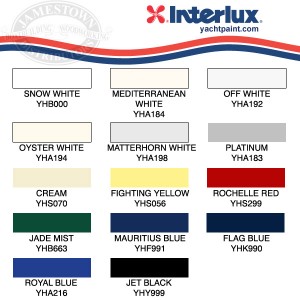 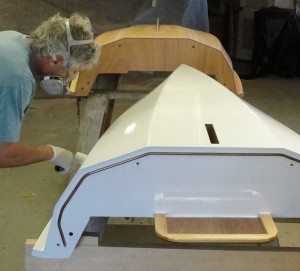 Remember that besides a good respirator, good ventilation is very important. If working indoors, an exhaust fan is key. The fan should be in one end of the shop and an open door or large window at the other end. This paint doesn’t smell for long, but when it’s going off it’s very bad to be around. RB.

For those of you building our boats that haven’t gotten to the stage of glassing the outside yet, please read the "warning" label below. We got an earful from one customer about his uni falling apart before he could get it on his boat and now we wonder how many people hate us for the same reason. His point was that we should supply two pieces, so that it wouldn’t need to be split in half and he’s right, except that this material is rather expensive and we know that it works to split it in half. The new "warning" label follows: 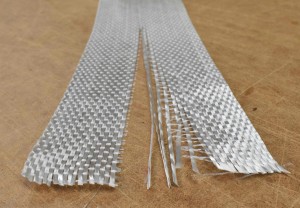 This unidirectional fiberglass is for reinforcing the outer faces of the gunwales on the after hull half.
Page 250 discusses the process and page 253 shows it, but please read this sheet for success!
This 3’’ wide fabric needs to be cut into two 1 1/2” strips.  Splitting it in half is easy, but it does want to fall apart after cutting, so read carefully.
The ideal way to keep from losing strands is to find a scrap of wood around 6 feet long (to cut the strip on) and leave the strips on that scrap until applying them to the gunwales. The scrap of wood can be anything clean, a 2x4, or a strip cut from your crate lid. Lightly mark the center of the 3” wide strip every foot or so and cut with scissors or a sharp knife.
When the time comes, place the scrap with the strips on it just below the gunwale (on a trash can or something) so that the strips can be carefully lifted and applied centered on the gunwale edge.
Placing the cut edge facing up will help retain strands and once it’s in place, Bob’s your uncle.
Remember, this is 13 oz material and it takes some time (and epoxy) for it to fully saturate.

This label is attached to every roll of uni that we supply with our kits.

The Victoria Classic Boat Festival happens annually right before Port Townsend's Wooden Boat Festival. Many from our local fleet grace their docks in neighborly appreciation of these beautiful boats as we welcome their fleet in the days that follow.

This year, the PT 11 took the Best Tender award in Victoria, "without even trying!" according to owner John Bailey. John and Anne own the Schooner Sir Isaac that has an amazing story of its own. We feel honored that they chose the PT 11 as their tender. 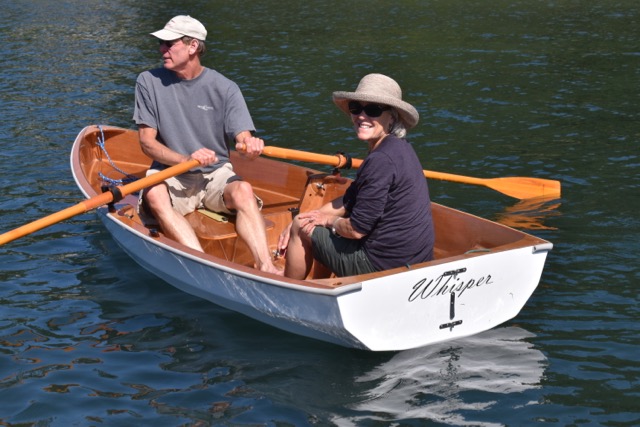 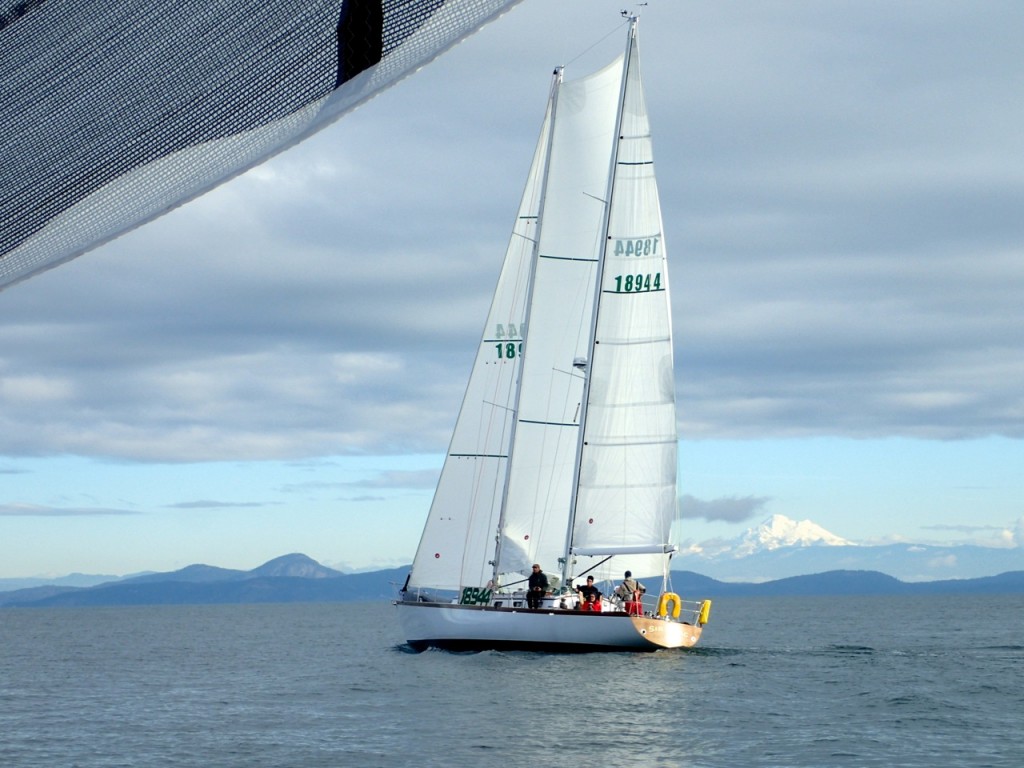 This is the second time the PT 11 has won this special award. In 2016, the very first SPEAR, Pato, tender to the classic double-ender, Vito Dumas, received the honor.

We thank our friends and builders of the PT 11 and PT Spear not only for choosing our designs but for building them so lovingly. Much of the attraction these dinghies garner once out and about in the world, is due to the craftsmanship put into them. We recognize that our kits ask a lot of every builder. It is a joy for us every time we learn that a builder has not only finished and gone sailing, but that they enjoyed the process and learned new skills.

Say it ain't so, Joe!
How disheartening to see a vendor of such nice craft from Port Townsend no less call a fender a "bumper."  This is such a lubberly mistake that it pains me to even draw attention to it.  It is akin to seeing a movie star pick her nose.  I sure wish I had never seen that!   But what is done is done and the best thing  you can do now is correct that horrible gaffe and we all shall agree to forever pretend it never happened. P.J. Nolan"

Russell and I do have a sense of humor and that email cracked me up! It is rare to receive such a harsh-and-gnarly critique that compliments at the same time. I must say, that takes some skill.

Fender or Bumper? I just had to find out. Searching online I found that vendors use the terms interchangeably for an assortment of barriers used on boats and docks. Could it be that we are all just movie stars picking our noses?

Since there is no reason to believe the internet, I turned to a more trusted source.

I actually still own a hard bound dictionary. It is 4” thick, weighs about 10 pounds, (it flattened my 6# postal scale) with gold lettering that proudly reads; The Random House Dictionary of the English Language. I had to haul it out, lug it to the table, and dust it off. Flipping through the musty pages, my handy-dandy magnifying glass was of considerable assistance.

FENDER; definition #5; A piece of timber, bundle of rope, or the like, hung over the side of a vessel to lessen shock or prevent chafing..."

Hmmm, that sounds about like what I was thinking except I picture the inflatable kind found at a marine chandlery.

Now that sounds about like what we have permanently attached to the outer edges of the gunwales on our dinghies.

For argument’s sake, one could say that they both serve a very similar purpose and regardless of their possible origins, for better or worse, language evolves.

In truth, the most accurate term for what we have is neither fender nor bumper, but, rubber rubbing strip or for an internet search; "rub-rail".  At least, for now, I can relax and not feel embarrassed.
However; I do take issue with the term, “lubberly”. I had to look that up too, just to be sure that I was properly insulted, at least for Russell's sake if not my own.

Hardly the case, my dear fellow. That would be a “horrible gaffe” on your part. But, as I am a friendly sort and would not want to disrespect anyone’s preferences or “pain” someone with my own, I heartily agree, “to forever pretend it never happened.”

Thank you for the challenge. It was fun. 😉 AE Brown