This article was written a while ago and somehow lost on my computer. When a recent wooden boat discussion showed up about flotation in boats, an intense search prompted by Russell's certainty that I had written on the subject, turned up the 'untitled', and thus, 'lost', document. So here it is.

In June of 2010, Russell and I embarked on a cross country road trip. We would not have done this except for 2 compelling reasons: an invitation to the Woodenboat Show in Mystic, CT and the chance to have the PT Skiff tested by the USCG.

The USCG has regulations for various classes of boats, and contrary to common belief, kit boat companies have the responsibility of providing a product that, built as designed, will pass federal requirements.

The PT Skiff falls under the category of “under 20ft outboard powered motorboats”. The rules for this category are particularly stringent due to a higher number of fatalities on record occurring on boats in this class. With ski boats and other high speed recreational boats under 20ft, this is not really surprising. So they have devised a method for testing motor boats under 20ft in a tank with 2 careful procedures.

First, the USCG wants to be sure that the rated capacity and HP of a boat are acceptable. To physically check this, they load a boat with 5 times it’s rated capacity or until the boat is about to submerge. For the PT Skiff, the former would be 6000 LBS. The computer images below demonstrate the displacement with 6000LBS and the maximum 9000LBS before submerging. These calculations were submitted to the CG headquarters and they agreed that our capacity label of 6 persons or 800LBS, or 1200LBS persons, gear & motor, was a modest rating.

The second critical test is to show what happens when a boat is totally flooded. This is called the Flotation and Stability test. 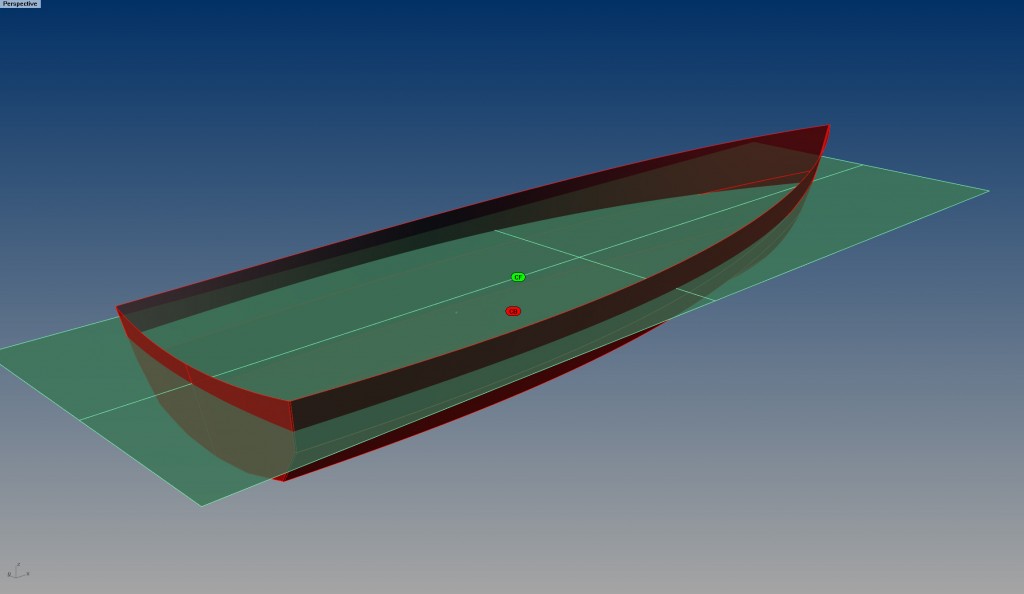 simulated 6000 Lbs in the PT Skiff (Image by Eric Jolley) 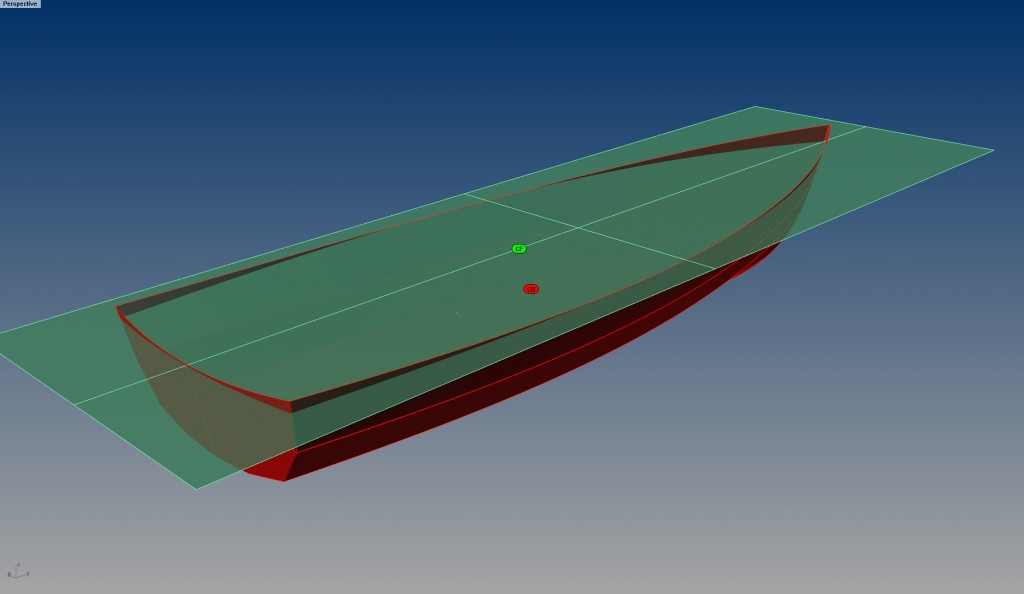 We arrived at our family’s home in Virginia on June 10th and took a couple of days to recover from the long time on the road and dip the skiff into the Chesapeake. 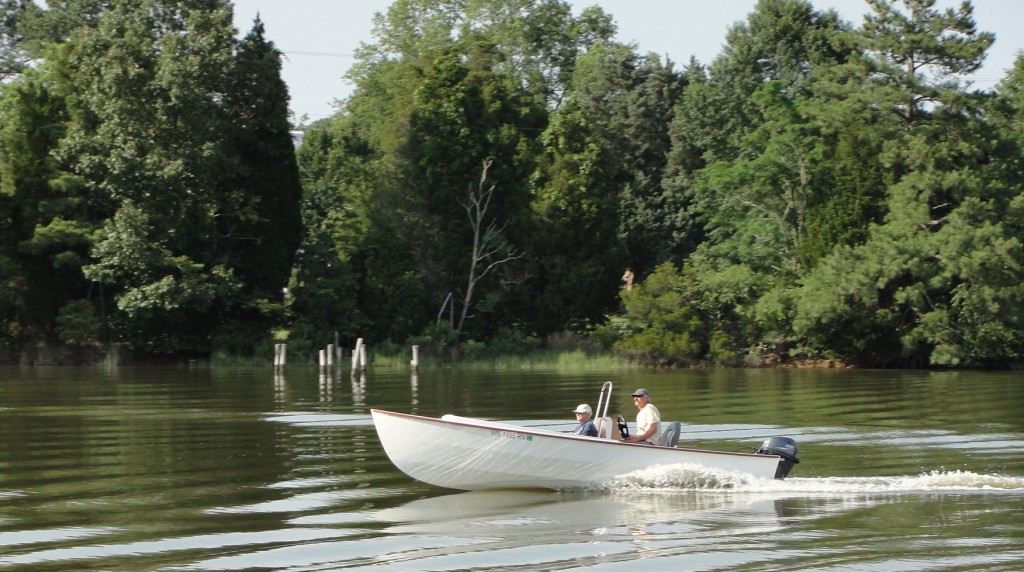 Touring the East River of the Chesapeake in the PT Skiff. Photo Ashlyn Brown

Over the weekend, Russell removed the motor and controls in preparation for the testing. We had been talking with the gentlemen at the CG about the testing procedure. While we were not concerned about 6000 LBS being loaded into the boat, we were a bit shocked to learn the method; blocks of pig iron weighing 800LBS each, measuring 1’x 2’x 2’ loaded into the boat. Further discussion revealed that the point load would be on the 1’ x 2’ base. The man in charge promised to stop the loading if he heard any “cracking”.

Russell spent the weekend considering any possible way to spread the load.  To put this into perspective, just one of these pig iron ‘blocks’ weighs more than twice the weight of the PT Skiff and, still roughly 1.5 times the weight even with motor & controls. They would be loading 5 of these blocks and then some. The lightweight construction of the skiff could get very stressed with that kind of point load and even the designers were concerned.  What about  smaller blocks or sand bags? we asked, or Water bags? We would cover the cost, we offered. No. They had their method and at this time, they were not set up to do it any other way. 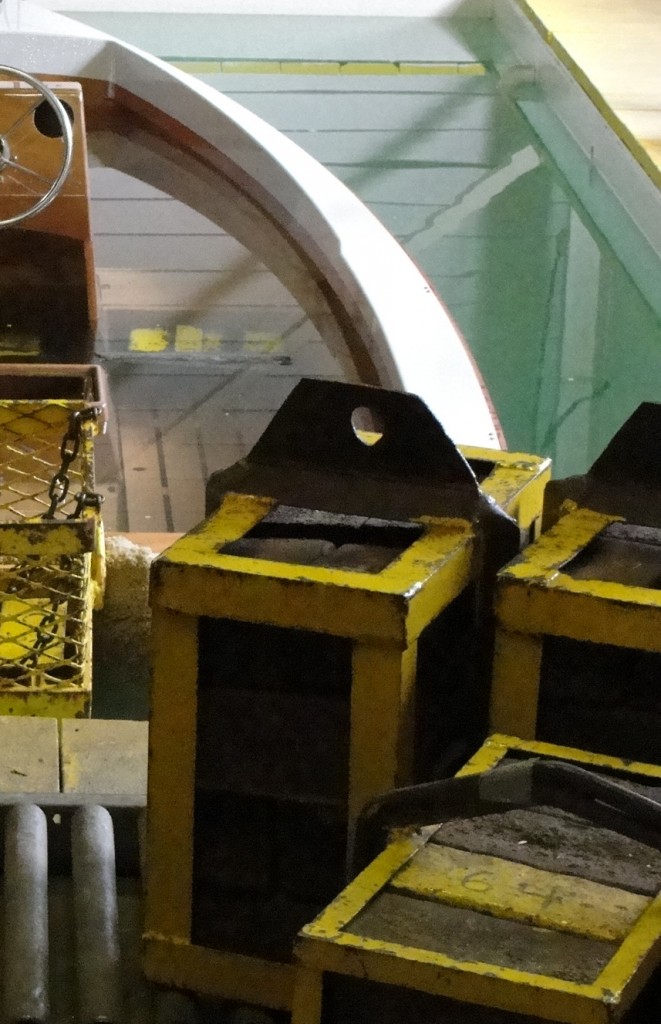 On the appointed day, with some trepidation, we drove to Solomon’s, Maryland where the one and only USCG testing facility is located, somewhat incognito, in an unmarked warehouse. We were greeted by a team of 3 middle aged men who scrutinized the boat on the trailer while we discussed our options. It was at this time that we learned that the capacity ratings had been accepted by headquarters so that the load test, while recommended, was totally optional.
On the one hand, we badly wanted to prove the boat and the method of build as capable of point loads such as this. On the other hand, if it did go ‘pop’, we would not have a boat for the boat show a week later, and this was most definitely, the only time we would be on the east coast with it.  Had the test been scheduled after the show, things would have looked different, but that was not the case. We were told that we could later make our own (albeit 'unofficial') load test that would verify the calculations.

The flotation and stability test remained and once the decision was made, our hosts relaxed and invited us to return at a given time to observe the test.
When we got back, they had the boat in the slings inside the building and were weighing it; 388 LBS. 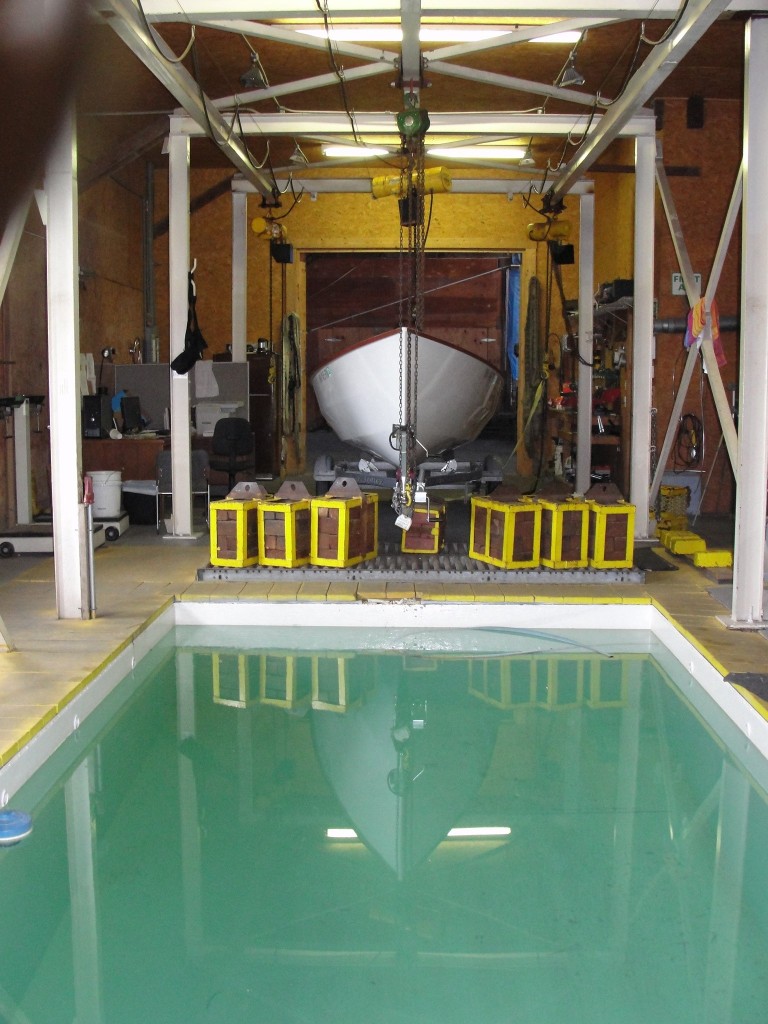 The PT Skiff weighed and ready for the “pool”. Photo; Ashlyn Brown

Next, a basket with lead weights was mounted on the transom to match the weight of the 25HP and other weights under the console and driver seat to simulate batteries etc.
They lowered the boat into the tank, which was a swimming pool measuring about 22ft x 10ft. All air voids were opened. In most boats, they have to drill holes but our air voids all have deck plate access. Hoses filled these areas first. The slings were then totally removed and the water continued to rise until it broached the back seat and ran out the scuppers. At this point, our host, demonstrated with red food coloring, the outflow from the scuppers and declared that the boat would not hold more water.
Now the boat had to ‘sleep’ flooded for 18 hours before the rest of the test could be done. We could come back early the next morning. 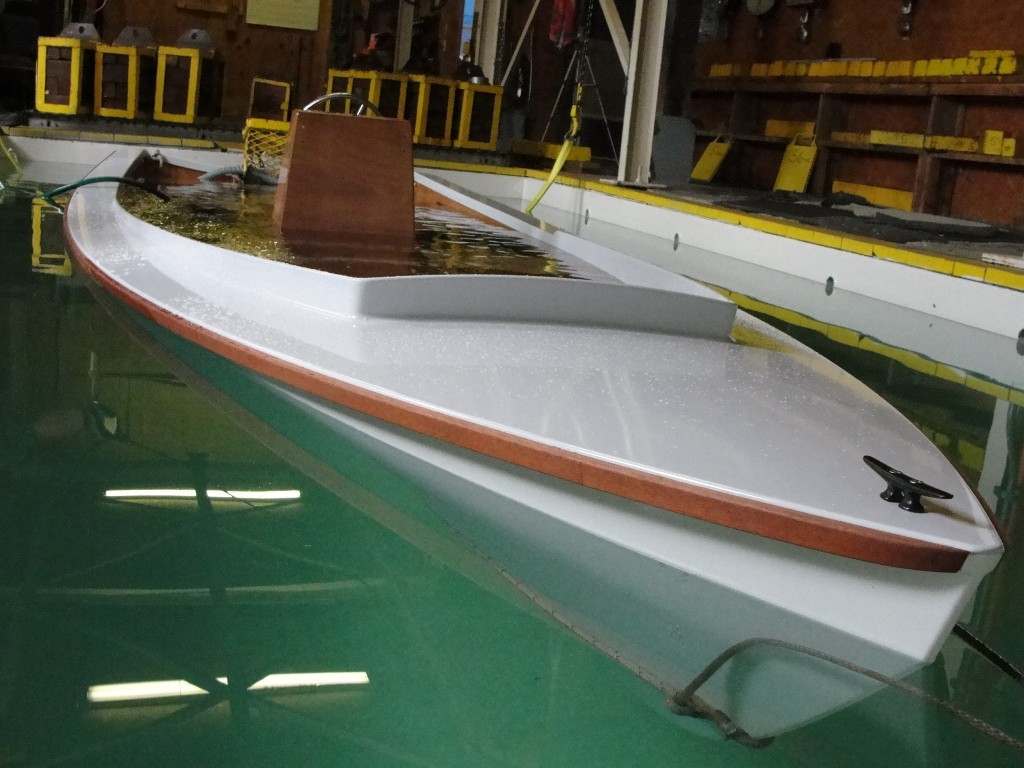 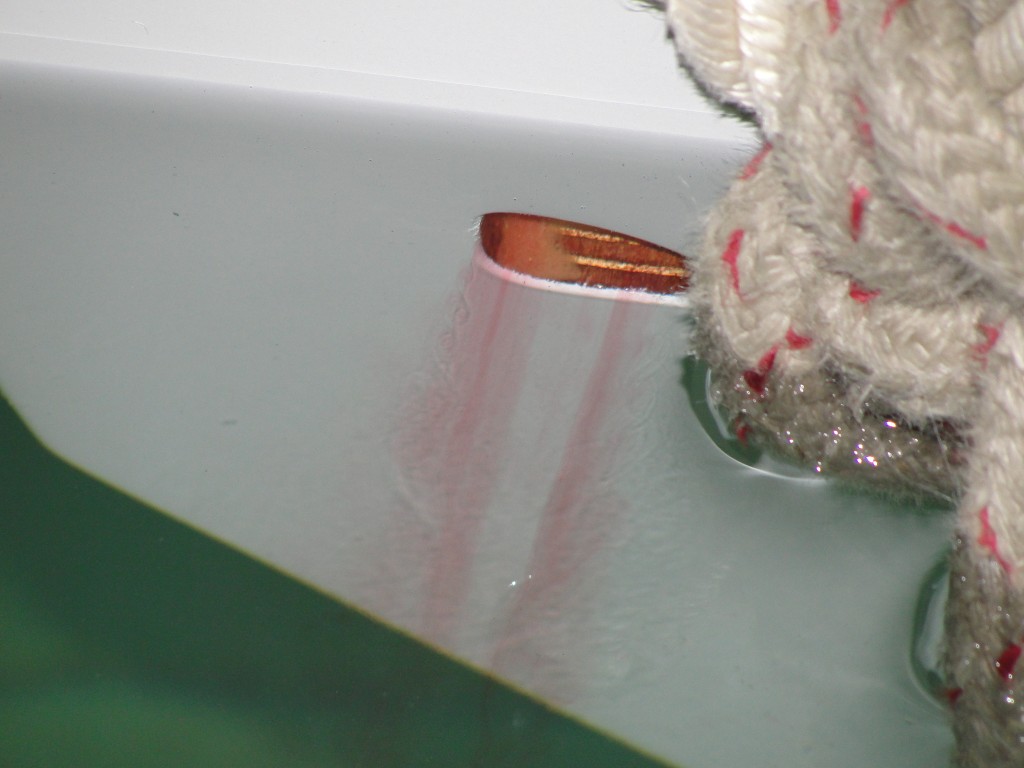 We walked from our hotel, across the little inconspicuous  bridge that proves this is an island and followed the singular street to it’s end where it loops back. The place definitely had an island feel to it with full marinas, lots of tourists, a big waterfront boardwalk, colonial style buildings housing stores with tropical patterned clothes, a Kontiki bar and plenty of restaurants. Russell had been testing the vanilla ice cream across country and here was no exception. We sat in the shade of a little umbrella and gave our critiques on his ice cream cone and my smoothie. It was very hot but it had been since we crossed Wyoming. The Chesapeake can boast a particular kind of hot that once experienced, is not to be forgotten in a lifetime by one’s sub-conscious senses.

We also strolled through the maritime museum and admired it’s collection of old local skiffs and fishing boats, long and narrow things of linear beauty that understood efficiency once upon a time.

We ended the day by having dinner at the Catamaran restaurant since they had an outdoor balcony. From there we could watch the sunset while idly eaves-dropping on a group of locals discussing, what else but, sex, parties, and politics. With the thick summer heat, the mellow southern drawl, and the chain smoking, our north west home felt far away indeed. 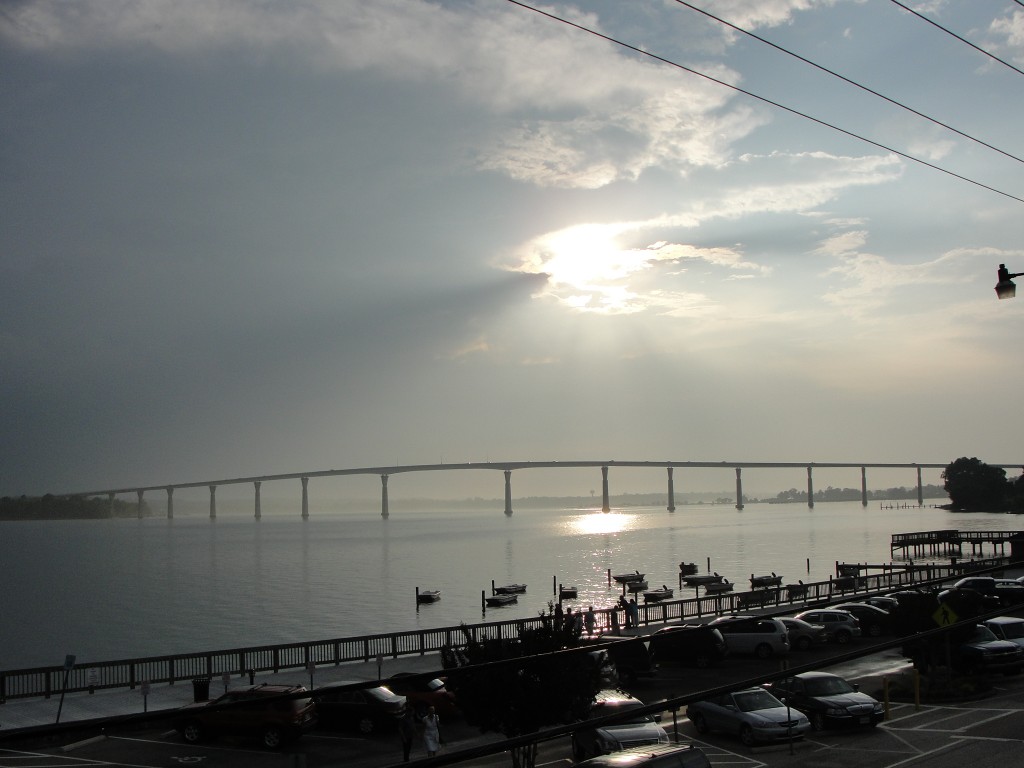 We arrived at the testing facility by 7:30 AM and the crew was already at work adding water to the flooded skiff just to be sure she was properly topped off.  The sling was put back on to support the boat while Steve carefully stepped into the boat and placed carefully calculated weights in prescribed locations to simulate the presence of people. They explained that they would move the weight around as if the passengers were to one side or the other, simulating a ‘worst case scenario’, and then measure the list of the boat with the slings removed. For outboard propelled boats, they should float fairly level with a maximum list is 30 degrees. In contrast, for boats with inboard motors, stability is not key but they do have to have some part of the boat above water in order to pass. This could be no more than the tip of the bow. No amount of explanation of this could make sense to me but those were the rules.
While I’m not the most technically minded person, Steve was a very good teacher and he explained every step and the concept behind it. He and his crew worked patiently and systematically as they recorded data, took pictures, worked with the electric winches, passed weights back and forth and stepped up to the waist in cold water. These guys had a good sense of humor but they also took their job very seriously and worked together like a well oiled machine.
By the end of the test, the PT Skiff listed a maximum of 11 degrees and all had gone extremely well. 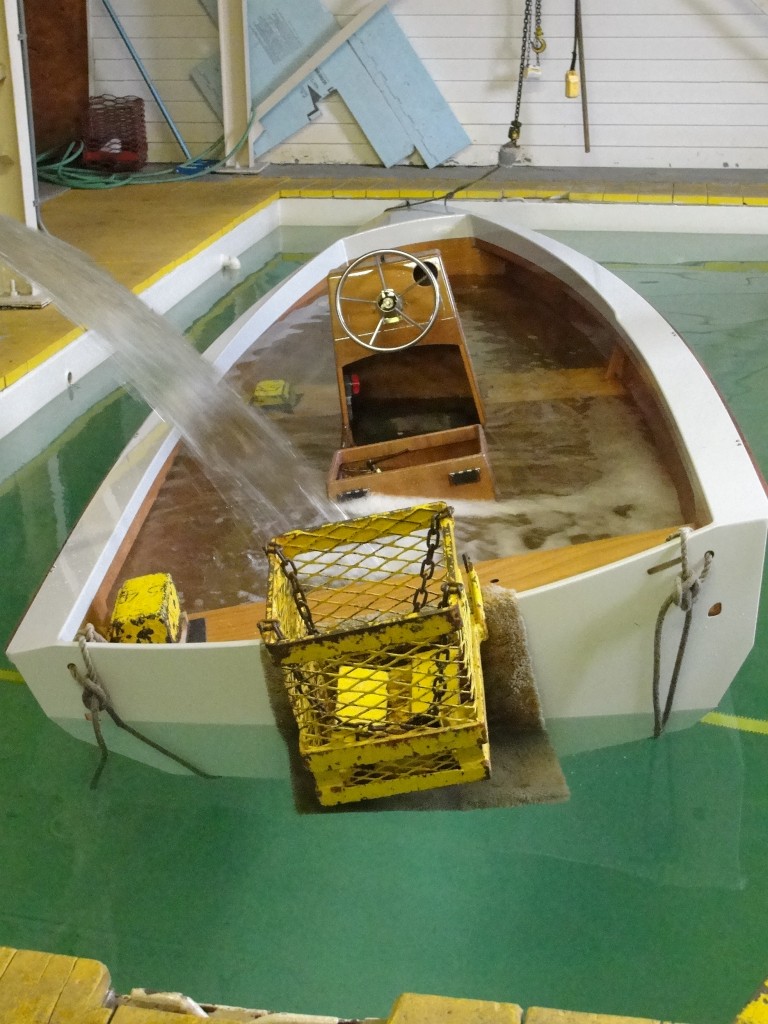 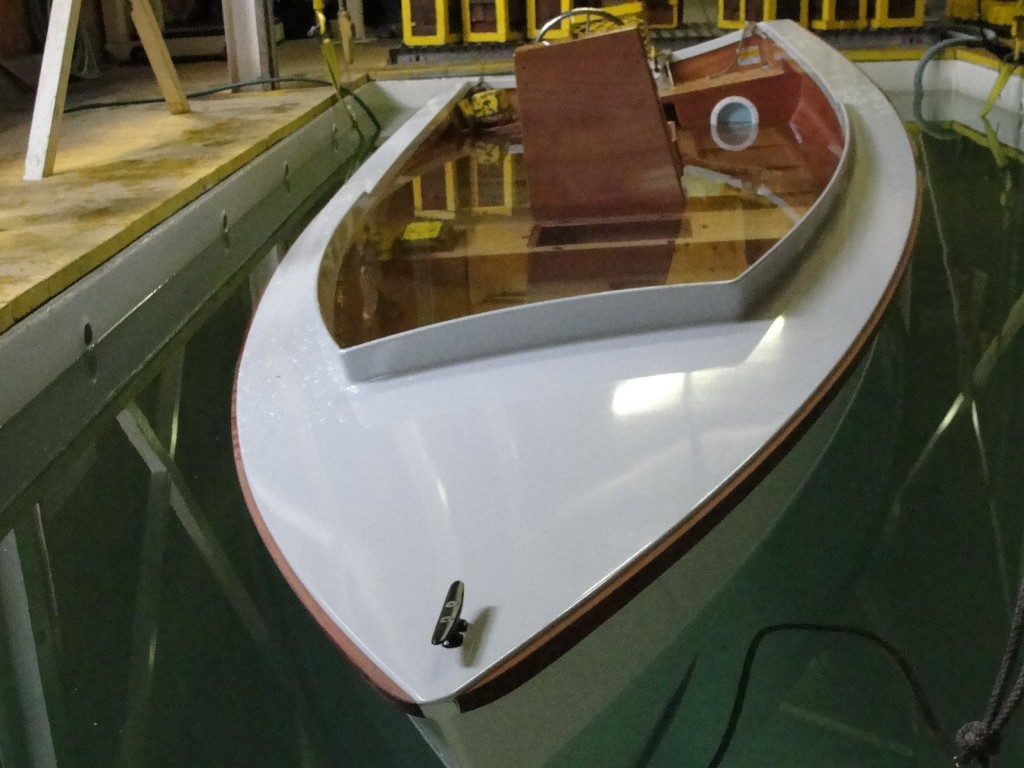 We picked the skiff up a couple hours later after they had pumped it dry and loaded it back onto the trailer. Steve explained the report he would prepare and best of all, calculated our mileage from Port Townsend and typed up a bill in our name. That’s right. Volunteering to have a boat tested is a paid deal and we got our check about 2 months later. Why do they pay you? Simple. It is cheaper than buying a boat. When new boats get red-flagged or there is any suspicion that it might not pass, these gentlemen buy it incognito and test it. If the boat fails, the manufacturer receives notice that it must recall all boats of this model at their own expense. Usually if the USCG goes to the trouble of buying a boat, there is already a probability that it will fail the test and there were enough boats in their shed to show that some do indeed fail.
A strong reason for re-designing the PT Skiff with side decks, in contrast to the first prototype, was to get the flotation up high; under the side decks and front deck as well as under the back seat. This not only provides better flotation when flooded but gives it the stability demonstrated by the test. Obviously, every boat could encounter conditions that outwit any controlled imitation but these tests show that the designers have taken the rules seriously and applied important safety factors into the design. 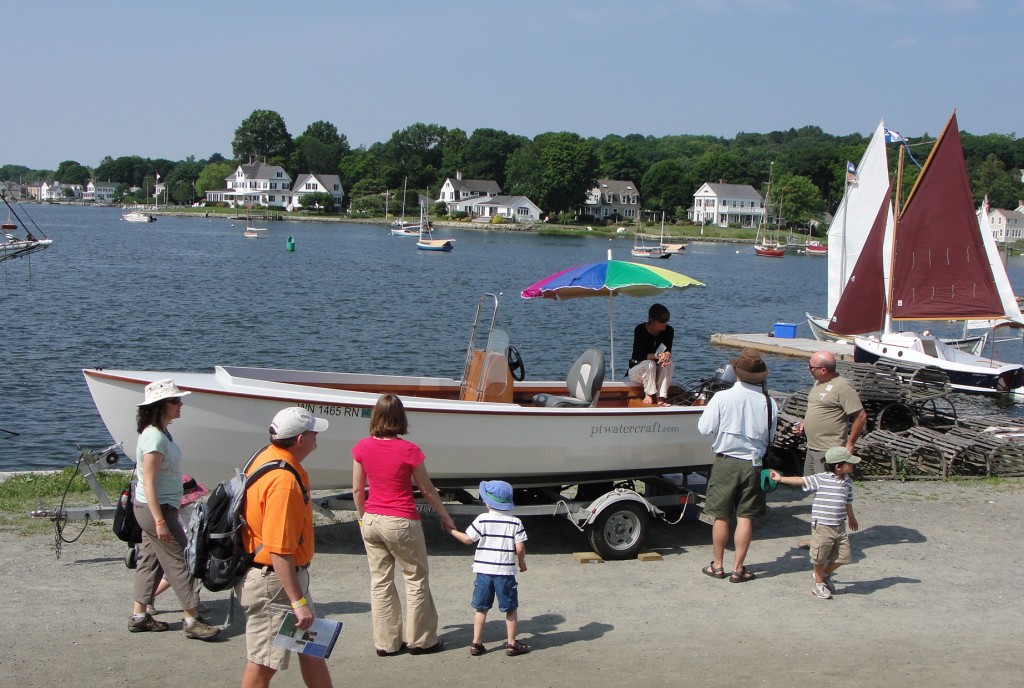 A final note; my explanation here is how I have understood the process and the reasoning behind it. Further “official” information can be found on the USCG website here (pages 16-18 specifically about flotation):
http://files.dnr.state.mn.us/education_safety/safety/boatwater/backyardboatbuilders.pdf
Or see the USCG website where there is lots of information.
http://www.uscgboating.org/regulations/boatbuilder_s_handbook/flotation_part1_f.aspx